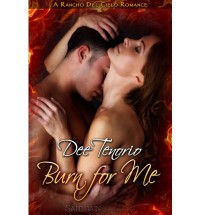 As a young man, there was nothing Raul Montenga wanted more than to get out of his small hometown and the life his parents had mapped out for him. Twelve years later he has finally returned home for good and what a surprise there is to greet him. He wakes up one morning to find an eleven year old on his doorstep, claiming to be his daughter. Chloe Gibson is the daughter of Penelope, town doctor and the woman who used to be hopelessly in love with Raul. But how could Chloe be his daughter if he and Penelope were never together? Unless the dreams he’s been having the past twelve years of making love to Penelope were actually memories…

Penelope Gibson was crushed after a drunken mistake at a wedding between her and Raul ends with him not only not remembering, but leaving town without saying goodbye. The one bright spot of the situation was the daughter she had. But when Chloe brings Raul back into Penelope’s life, Penelope’s torn between wanting to protect her and her daughter’s heart and wanting to fall back into the arms of the man she has loved for so long. Raul will have his work cut out for him if he wants to regain the trust and love he lost long ago.

Dee Tenorio has definitely delivered a burning hot reunion romance with Burn for Me. Penelope is a heroine you have to love. She’s smart, hardworking, loving, and does her absolute best to care for and protect Chloe. Raul, while he may have once taken Penelope for granted, does a fabulous job of proving that he’s in for the long haul in his quest to win Penelope’s heart. Chloe is a wonderfully entertaining child with intelligence and cunning that keeps her parents constantly on their toes.

While there are no black-hatted villains in Burn for Me, Penelope does face some pretty harsh prejudice from a character I won’t name for spoiler reasons. I was interested to see how Ms. Tenorio would get Raul and Penelope to their happily ever after and I will only say that I was glad of how things worked out.

All in all I adored Burn for Me. It’s both sexy and romantic – what more could you ask for? This is the first book of Ms. Tenorio’s that I’ve read and it definitely won’t be the last. Though each book in her Rancho Del Cielo series stands on its own, I will be racing to read the first two stories in the series, Betting Hearts and Love Me Tomorrow.
Tweet