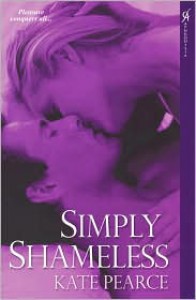 Over eighteen years ago, Helene Delornay and Philip Ross met on their way to new lives. When a carriage accident left them stranded at an inn, neither could resist the temptation the other presented. Long hours of passion connected Helene and Philip in ways they never expected. But Helene, who survived the worst horrors of the French Revolution only because she was traded to the guards at the Bastille, doesn’t believe herself a good enough match for the gentleman who so quickly captured her heart and thus she turns Philip’s marriage proposal down.

Now Helene is the owner of London’s most exclusive pleasure house and though her dreams of love died nearly two decades ago, Helene is proud of what she has accomplished. Madame Helene’s House of Pleasure offers its patrons every desire they could imagine; no limitations as long as their pleasures are between consenting adults. What Helene doesn’t expect is her greatest desire to walk through her establishment’s doors.

Brava, Kate Pearce! Simply Shameless is a book worthy of the proprietress of a pleasure house. Both the characters and the book itself are intelligent, open, understanding, and wonderfully seductive.

It’s impossible not to fall in love with Helene and Philip. Helene is a survivor through and through. She has been through some of the worst life has to offer and has come out the other side successful, strong, and deeply caring. From the very first book in the series I admired Helene, but after reading Simply Shameless my respect for her reached new heights. And nothing made me happier than discovering the hero Ms. Pearce created for such a fantastic heroine fit her to perfection. Upon first meeting Philip, it is clear he is a man full of joy and life and I was immediately charmed. It broke my heart to see that the intervening years of his separation from Helene sucked the happiness right out of him. I enjoyed watching him take control of his life and sexuality; it made his reunion with Helene all the sweeter (and spicier as well). It would be remiss of me to write about Simply Shameless without mentioning its blazingly sensual love scenes. Ms. Pearce has a knack for raising the heat of the room in the space of just a few sentences, nevermind an entire book.