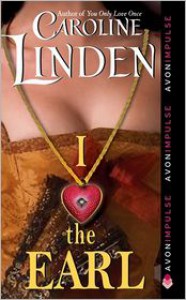 At thirty years old, Margaret de Lacy has almost given up hope of ever finding a husband. All that changes when her brother inherits a dukedom. He decides to settle an enormous dowry on her and suddenly men are flocking to Margaret in droves! But Margaret wants love, not a man who’s after her fortune.

Rhys Corwen, Earl of Dowling, needs a fortune badly, and he’s resigned himself to the fact that he’ll have to marry into it. Margaret fits his needs perfectly, but Rhys is surprised to find he’s more captivated by the lady herself than the money marrying her would bring. Margaret, however, won’t be so easily won over. She’s refuses him outright, claiming she won’t marry a fortune hunter. It’s up to Rhys to convince Margaret that he’s after the same thing as she, something they could find with one another: love.

Margaret de Lacy isn’t the only one who loves the Earl of Dowling – Caroline Linden has me falling in love as well!

I Love the Earl is one of the most charming stories I’ve ever read. Each time I read Margaret and Rhys’s story, I find myself smiling. Maggie is a wonderful heroine. She isn’t gorgeous and she isn’t out-of-this-world extraordinary in any way for the time period. She is, however, smart, funny, loveable, and relatable. Ms. Linden made me adore Margaret from the start and I knew it’d take one heck of a hero to please not only Margaret, but me, the reader. In Rhys, Ms. Linden has created a hero that’s more than up to the task. He’s an earl who’s had exceedingly bad luck, which has now left him impoverished. While he may have found a way to be introduced to Margaret because of her dowry, it’s clear within minutes that it’s Margaret – not her money – that he falls head-over-heels for. I have to admit, I envy Margaret. Rhys is an incredibly romantic hero, though he’s not showy about it; it’s in his words, his thoughts, and his actions. He made me swoon and I devoured I Love the Earl, wanting to see how he and Margaret managed the obstacles that tried to block their road to happily ever after.

I Love the Earl is the prequel to Ms. Linden’s The Truth About the Duke series. Having read and enjoyed the first book in the series, One Night in London, it was interesting to read about not only Margaret, but her brother, the titular duke of the series. The only downside of I Love the Earl is that it increased my excitement to read the rest of the books series which, sadly, are not yet available. Still, you won’t have to twist my arm to re-read I Love the Earl as I wait for more stories of the de Lacy family. I Love the Earl is like a tasty treat; I’ve been coming back for seconds, thirds, and more!
Tweet