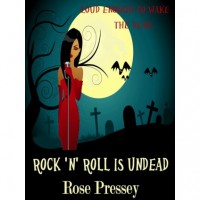 Veronica Mason and her rockabilly band, The Voodoo Zombies, are about to get their big break. Then Johnny, Veronica’s vampire bass player is found staked through the heart. If that’s not bad enough, Veronica – a witch whose powers never seem to work well at all – has a vision of Johnny’s murder. She could just let the paranormal police handle it, but strange things start happening; strange cars are following her, people are disappearing, and her sexy new bass player, Buzz Vaughn, is more than what he seems. With a potential record deal on the line and a killer hitting too close to home, it’s gonna be one busy week for this rockabilly-loving witch.

Rose Pressey puts a lighthearted spin on paranormal murder mysteries in Rock ‘n’ Roll is Undead. The first Veronica Mason book is quirky, but unfortunately not quirky enough to compensate for the story’s flat characters and dragging storyline. Though Ms. Pressey creates likeable characters, I yearned for Veronica, Buzz, or anyone in the book to show some depth. Sadly, they’re all pretty light and fluffy. The multiple mysteries – Who is the killer? Who is Buzz, really? – could have made up for this, but it didn’t, as the answers to those questions were incredibly obvious. Having figured out the mysteries early on in the story, I was left with nothing to sustain me for the majority of the book. Overall, Rock ‘n’ Roll is Undead was a miss for me, but I wouldn’t discount trying one of Ms. Pressey’s other books, so long as it’s not a mystery.
Tweet