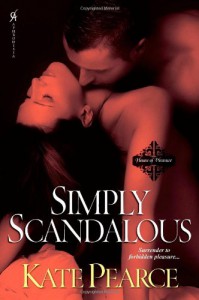 After years away from home, Richard Ross has finally returned to London to be with his family. But even the delights of his stepmother’s pleasure house cannot distract Richard from the rut he finds himself in. Then an encounter with an enticing stranger changes everything…

Violet Lennox, a former spy known as Violet LeNy, has come to London with her twin seeking safety. What she finds instead is Richard, the man she loved and betrayed years ago. Richard thought her dead, and he’s furious when he learns of her deception. Neither anger nor years of separation can quell the passion that always burns bright and hot between them, but Violet knows Richard will never trust her again. Still, she cannot help but hope to win his love back. That is, if a dangerous enemy doesn’t kill her first.

It’s always sad to see a beloved series end, but Kate Pearce gives the House of Pleasure series a fantastic send-off with Simply Scandalous. Violet and Richard are two characters who are far more than most people believe them to be. Their relationship after they reconnect is tumultuous for a while, but Ms. Pearce had me rooting for them by the end. I do wish, however, that we’d seen some of Violet and Richard’s shared past, since their love story in Simply Scandalous is built on the foundation of them having fallen in love years before. Having seen at least pieces of their initial romance might have helped me connect with them earlier in the story.

Sharing the spotlight with Violet and Richard are Ambrose, the manager of the pleasure house, and Emily, Richard’s sister. Ambrose and Emily’s romance might be my favorite of the two love stories in Simply Scandalous. Emily is the most sheltered member of her very unusual family, but she knows what she wants from life and, more importantly, who she wants and is willing to risk everything for love. Ambrose, in turn, is a former slave who is quite clearly in love with Emily but believes that racism and the difference in their social classes means he doesn’t have a chance with her. It isn’t an easy road to happily ever after for these two, but Ms. Pearce makes the journey well worth it.

Simply Scandalous is the ninth book in the House of Pleasure series. Though it can be read as a standalone, I don’t recommend doing so. Because of all the supporting characters and the sometimes complicated relationships in Simply Scandalous, I recommend at least reading Simply Shameless (the story of Philip, Richard and Emily’s father, and Helene, their stepmother) and Simply Carnal (the story of Christian, Richard and Emily’s half-brother). The backstories of the supporting characters in Simply Scandalous are helpful in understanding how they connect with Richard, Emily, and Ambrose. The only downside to having read and loved Simply Shameless is that I was already so attached to Philip that I was sometimes frustrated with Richard’s views on him. Richard’s opinion of his father is tainted by the influence of his deceased, rhymes-with-witch mother. Since I already knew the true story of Philip’s first marriage, I was eager for Richard to make peace with his father. In the end, though, some of my favorite scenes in Simply Scandalous involve Richard and Emily’s rather unique family. Though the Delornay-Ross clan is full of misfits and sometimes brazenly scandalous people, the love they all have for each other is touching.

While Ms. Pearce has stated that Simply Scandalous is the final House of Pleasure book, it doesn’t mean everything’s wrapped up in a tidy bow. Indeed, Simply Scandalous makes way for Ms. Pearce’s next series, The Sinners Club, which is a relief since I was intrigued by Violet’s too-charming-for-his-own-good twin, Jack, who is supposed to be the hero for the first book in the new series. So while I’m sad to say good-bye to the House of Pleasure series, I can hold out hope that some of my favorite characters will make a cameo in the first Sinners Club book.