Review: How to Pursue a Princess by Karen Hawkins 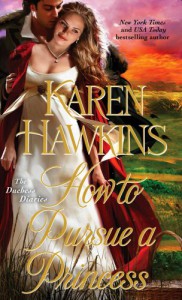 With her newly married sister spending her honeymoon abroad, it lands on the middle Balfour sister, Lily, to save her family from losing everything. With the help of her godmother, the Duchess of Roxburghe, Lily sets out to capture the heart of — or rather a marriage proposal from — the handsome and wealthy Earl of Huntley. There’s just one problem: a prince without a penny to his name has captured her heart.

Piotr Romanovin, Prince Wulfinski of Oxenburg, wants to find a wife who will love him not his wealth or title. When he comes to Lily’s aid after an accident, he knows she is the woman for him. But Lily needs a husband with the money to pay her father’s debts and Wulf is trapped in his own lie. Can Wulf convince Lily to choose him over Huntley even though she believes he’s more pauper than prince?

Karen Hawkins puts a sensual spin on Little Red Riding Hood in the fast and fun How to Pursue a Princess. Wulf is a bold, sometimes rude prince with a romantic heart. He’s not the type of man to let anything stand in his way, but he’s out of his depth when Lily doesn’t fall into his arms like he’d hope. Lily’s a woman whose head is telling her to choose Huntley while her heart is telling her to pursue Wulf. Her dilemma is logical, but it does require that you suspend disbelief for the premise of the book to work (the eldest Balfour, Rose, did just marry a wealthy lord and the reasoning for not trying to contact her wasn’t strong enough for me). However, no matter what it was that brought them together, I was rooting for Lily and Wulf to make their relationship work.

A cast of meddling supporting characters and a secondary romance storyline round out How to Pursue a Princess, often adding humor to the story. While I enjoyed How to Pursue a Princess, what the book really did was make me eager to read the next Duchess Diaries book, How to Entice an Enchantress. The groundwork Ms. Hawkins has lain for Dahlia Balfour’s book has me on tenterhooks, and I can’t wait to see how the crafty Duchess of Roxburghe helps the youngest Balfour sister find happiness.