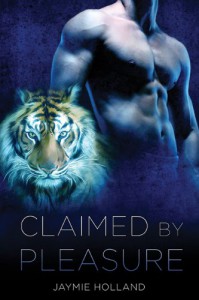 It’s been a year since Alexi O’Brien’s twin, Alice, disappeared, but Alexi isn’t giving up hope of finding her sister. Even being pulled through a looking glass and finding herself in a magical world doesn’t faze Alexi for long. Nothing will take her focus off finding Alice…except perhaps the handsome, dominant King Darronn.

Darronn, King of Spades, is used to women submitting to him. Getting Alexi’s submission, however, will be a challenge; one Darronn revels in accepting. A battle of wills begins between the two, but it’s not long before Darronn finds himself falling for the woman who will be his mate. The question is, will he be able to convince Alexi to stay with him when she finds out he’s been keeping a very important secret from her?

Watch out for the sparks that fly in Claimed by Pleasure – they’re wickedly hot! Jaymie Holland knows how to make both her characters and readers sweat, and it shows. Passion and emotion run extremely high in Claimed by Pleasure, which makes the book feel like it’s moving at lightning pace (which isn’t a bad thing).

Alexi is a strong, stubborn woman, one many readers will be able to relate to. She doesn’t feel that she fits in the world of Tarok, though she clearly does. The skirmishes between her and Darronn give Claimed by Pleasure a different feel from the first Wonderland book, Taken by Passion. What I loved most about Claimed by Pleasure was that both Alexi and Darronn had a lot to learn about relationships. Compromise is a word neither likes, but once both of them are on the same page, their relationship is electric!

Note: Claimed by Pleasure by Jaymie Holland is a reissue of Wonderland: King of Spades by Cheyenne McCray.
Tweet