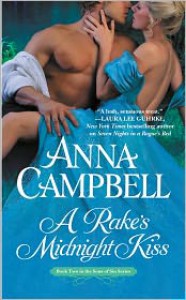 My review cross-posted from Wit and Sin: http://witandsin.blogspot.com/2013/08/review-rakes-midnight-kiss-by-anna.html

It’s no secret that Sir Richard Harmsworth is illegitimate. All of society knows it, and many choose to rub his face in the circumstances of his birth. Determined not to let the ton see how much the whispers and outright mocking bother him, Richard wears a mask of rakish gaiety. But one night it becomes too much and Richard decides to go on a quest. He’ll find the lost Harmsworth Jewel – a piece that legend claims signifies the rightful heir – and he’ll rub society’s nose in it. After tracking stone to a small town in Oxfordshire, Richard dons to guise of Christopher Evans and sets out to seduce the stone from its bookish owner. What Richard doesn’t expect when he sets out to find the Harmsworth Jewel is something far more valuable than any gem…

Hiding one’s true nature from the world is something Genevieve Barrett excels at. No one knows that she’s the brilliant mind behind her father’s scholarly papers. Genevieve is content to bury herself in books and she’s planning on breaking away from her current life and making a name for herself by writing about the Harmsworth Jewel. But when the mysterious Christopher Evans shows up, claiming he wants to her father to tutor him in medieval history, Genevieve learns that desire can be even more alluring than the life she has planned out for herself.

Richard never expected to fall for Genevieve, but now that he has, he has to wonder if she’ll ever forgive him for his deception. Then again, if a madman after the jewel has his way, Richard won’t live long enough to find out.

Secrets, seduction, and sparkling chemistry are the name of the game in A Rake’s Midnight Kiss. Author Anna Campbell has once again delivered a richly entertaining tale, complete with beautifully-drawn characters and a romance that’ll leave you smiling.

Richard is a hero you can’t help but sigh over. He’s handsome, protective, and kind, but he isn’t perfect. People have used his illegitimacy as a weapon against him all his life and my heart broke for how scarred he is because of this. Richard’s need to prove himself to society causes him to make many mistakes, but it also leads him to Genevieve, the woman who helps Richard heal his heart. Genevieve is a brilliant woman who’s out of her depth when it comes to dealing with Richard (or Christopher, as she knows him for much of the book). I loved Genevieve’s intelligence and I admired her determination to make name and a life for herself in a male-dominated field. The banter between Richard and Genevieve is lively and incredibly entertaining. I can’t count the number of times the two of them made me grin.

In addition to the romance, the character arcs, and Richard’s quest for the jewel, Ms. Campbell adds a large dollop of danger in the form of an obsessive collector who’s also after the jewel – and Genevieve. This is the one plotline I wasn’t quite so fond of, mainly because I was frustrated by the Barrett family’s blindness when it came to the villain. That being said, I did actually like the darker undercurrents this storyline added overall.

A Rake’s Midnight Kiss is the second book in the Sons of Sin series, but it can be read as a standalone. Richard’s two best friends do play strong supporting roles, Cam in particular. I give you fair warning, however: if you’re anything like me then this book will leave you more eager than ever for Cam's book. A Rake’s Midnight Kiss is very different from the first Sons of Sin book, the gothic Seven Nights in a Rogue’s Bed. Indeed, it’s actually quite different from a lot of Ms. Campbell’s books, as it’s more lighthearted. As much as I love Ms. Campbell’s darker books (and I do count them among my favorites), Richard and Genevieve’s story was fun change of pace.

Anna Campbell is a master of historical romance and every book she writes has been a winner to me. A Rake’s Midnight Kiss adds to the treasure trove that is Ms. Campbell’s work and I cannot wait to read the next Sons of sin novel!