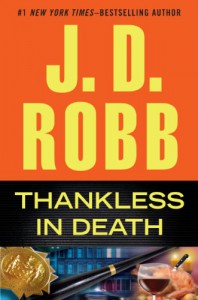 Thanksgiving is a time for family and togetherness. Even Lieutenant Eve Dallas is reluctantly getting into the spirit as she prepares for a visit from her husband’s family. But not everyone is in the holiday spirit. Jerry Reinhold has just murdered his parents, stunning everyone who knew him. Knowing who the killer is doesn’t help Eve; pure luck has Jerry one step ahead of her. What’s worse, Jerry has developed a taste for killing and he’s out to target anyone he ever had an issue with. The clock’s ticking and it’s up to Eve and her team to narrow down a seemingly endless list of potential targets before Jerry strikes next.

THANKLESS IN DEATH is an excellent – albeit disturbing – addition to the incredible IN DEATH series. Author J.D. Robb has outdone herself in creating a villain so arrogant, so petulant and so vividly-drawn that I actively hated him. In this story we spend almost as much time with Jerry and his victims as we do with Eve and Roarke, and I found myself becoming attached to some of Jerry’s victims, which drew me into the story. I could feel Eve’s frustration mounting as Jerry managed to elude her, and I give Ms. Robb high marks for making THANKLESS IN DEATH one of the tensest reads in the series.

Murderers aside, what I truly loved about THANKLESS IN DEATH was seeing Eve’s professional development. Eve hits the highest point in her career to date, and she’s presented with an offer that many will likely believe has been a long time coming. This book also features a few great moments between Eve and some minor characters in the series, including Nixie Swisher from SURVIVOR IN DEATH and Nixie’s adoptive parents, Richard and Elizabeth DeBlass from NAKED IN DEATH. I really enjoyed getting to see the impact Eve has had on the lives of others. What’s more, I loved that Eve herself got to see the difference she’s made in the lives of those she’s helped.

Because it is so well written, THANKLESS IN DEATH is a hard book to read at times. I found myself gripping the pages of the book tightly more than once, hoping against hope that Eve and her team would manage to take down Jerry. Whether this kind of case is to your taste or not, Eve and Roarke fans will surely be delighted to catch up with these dynamic leads and their loved ones.