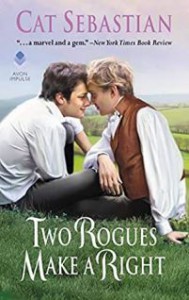 Friends-to-lovers is a trope I adore when done well and Ms. Sebastian does it exceptionally well. Will and Martin are lifelong best friends and neither will hesitate to drop everything to come to the other’s aid. At the beginning of this story it’s Martin, who suffers from chronic illness made worse by the poor London air, who is nearly on death’s door. Will sweeps him off to the country to heal and close quarters becomes the catalyst for them to take a chance on becoming something more than friends.

Martin is a grumpy hero with a hidden soft side. His father was a monster whose actions have had a strong impact on Martin. After his father’s death, Martin lost everything and when combined with his chronic illness he often feels helpless and it’s understandably frustrating. He doesn’t want to be dependent on others but the life he was raised in left him ill-equipped to survive. I loved watching Martin evolve over the course of the story, to learn what he can do and to accept that it’s ok to ask for help. He carries deep guilt that drags him down and I loved to watch him learn, heal, and grow. Most of all, I wanted him to get his happily ever after with Will.

And oh, Will. The middle Sedgwick is sweetness to the core and wears his heart on his sleeve. He cares deeply, especially when it comes to Martin. Will was raised by a neglectful father and suffers PTSD from his time in the navy. Will is a recovering addict with issues of his own but he’s finding his way. The obstacles in the way of the romance are mostly internal, but nevertheless I was sucked into Will and Martin’s story. Every bump in the road to happily ever after felt organic to these heroes and their histories. I also love that this story features a bisexual (Will) and demisexual (Martin) hero and that consent and dialogue were key parts to the love scenes. Every aspect of this romance worked for me and thinking about the book a day after I finished it, I realized how much the small gestures in this story – a touch here, fixing an article of clothing there – made such a big impact and really make Two Rogues Make a Right stand out from the crowd.

Two Rogues Make a Right is the third book in the Seducing the Sedgwicks series. Since I haven’t yet read the first two books I did feel like I was missing a bit of background information, but not so much that the story was impacted. All in all, I loved Martin and Will’s story. It’s a romance with heart featuring well-drawn characters whose needs and desires are complex and interesting. I cannot wait to catch up on the Seducing the Sedgwicks series as well as Ms. Sebastian’s other works.