Review: Say No to the Duke by Eloisa James 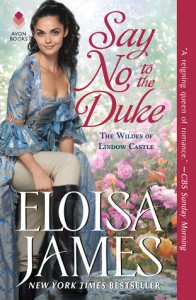 Lady Betsy Wilde’s first season was a smashing success and all of society loves the image of a perfectly proper lady she presents.  But there’s one type of man she hasn’t netted a proposal from: a duke.  Then one comes along, the nice, proper sort of future duke Betsy knows she should marry.  There is just one problem…one very grumpy, unruly, deeply wounded problem: her brother’s best friend, Lord Jeremy Roden.

Jeremy came back from war a changed man.  Haunted by the past, he knows he’s not suited for Betsy.  But their verbal sparring sparks life in him for the first time and Jeremy can’t seem to stay away.  It’s not long before he’s falling for Betsy, the real Betsy that not many see, the wild, bold woman she keeps hidden.  But Betsy has a life planned out for herself, one that includes marrying the ideal duke.  Can Jeremy convince her to say no the duke and yes to a man with a scarred but loving heart?

Say No to the Duke is by turns playful, sensual, heartbreaking, and hopeful.  Eloisa James’s fourth Wildes of Lindow Castle tale is so engaging that I devoured it in one sitting.  Betsy and Jeremy just grabbed my heart from the first page and didn’t let go.

Betsy, the oldest daughter of the Wilde brood, carries a hidden fear: that she will be judged by society because of her mother’s actions.  Her mother created a scandal when she abandoned her husband and children to run away with her Prussian lover.  Betsy’s teenage years were spent shaping a demure, perfect façade to prove that she’s nothing like her mother.  Society takes her at face value, but Jeremy easily sees beneath the surface.  He sees the fire and passion Betsy hides and he needles it out of her in hidden moments that make the first part of this book snap and sparkle.  I loved watching Betsy come into her own and embrace the part of herself she keeps hidden.  She’s a bright, wonderful heroine who charmed the heck out of me.  As for Jeremy, he’s a war hero who sees himself as anything but.  He has PTSD and though falling for Betsy doesn’t cure it, the entire Wilde family’s care and acceptance of him gives him the support and time to start to heal.  Jeremy is also quick, incredibly observant, and not afraid to shake things up.  Both of them need to learn to learn self-acceptance, and their personal journeys are fantastic.  As a couple, they make my heart sing.  Sparks fly between them for the first part of the book and I didn’t think it could get any better.  But when they give into their attraction Say No to the Duke shines.  Jeremy and Betsy’s romance is sensual, playful, and heartwarming.  I just loved it.

Say No to the Duke can be read as a standalone if you don’t mind some spoilers from previous Wildes of Lindow Castle books.  The Wilde family is quite large and vivacious, but though I love them all I was glad Ms. James kept the supporting cast of this book rather small.  It allowed the focus to remain on Betsy and Jeremy while still adding some Wilde sparkle, mostly in the form of Aunt Knowe, a character so awesome I wish she were my aunt.  I can’t think of anything I didn’t love about Say No to the Duke.  It’s a fast-paced, utterly addictive story with engaging, well-rounded characters, a refreshing lack of false drama, and a romance that made me smile.  Joyfully Recommended!