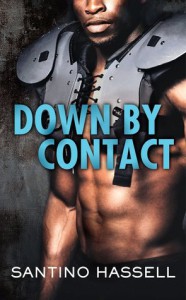 Down by Contact is insanely addictive! Like the first Barons book, Illegal Contact, Simeon and Adrián’s story is so compelling that you’ll want to be sure you have plenty of time to devour it in one sitting. Santino Hassell’s writing has power and passion and his characters are so vibrant that there’s no way this story won’t stick with you.

I dare readers not to fall in love with Simeon from the start. He’s so charming that he lights up the page and it’s easy to see why almost every one he meets is instantly at ease with him. In the previous Barons book, Illegal Contact, Simeon came out as gay in solidarity with his best friend and teammate, Gavin. Coming out hasn’t harmed Simeon’s reputation in any visible way, but the invasiveness of the media and the online taunting from his former teammate now rival, Adrián, is wearing on even the generally positive Simeon. Simeon isn’t perfect, but he’s a pretty perfect hero. He’s kind, generous, and has a spine of steel. He doesn’t let anyone walk over him, but he’s also willing to forgive. I absolutely loved him and couldn’t wait for him to fall for someone who’s his match.

While Simeon made me swoon, Adrián isn’t immediately endearing. And though it might sound weird to say it, I enjoyed the fact that Adrián is deeply flawed at the start, because he grew into a hero worth rooting for. Adrián is aggressive and doesn’t think before he speaks, throwing out comments he doesn’t even realize are homophobic and deeply hurtful. He also carries deep resentment toward Simeon for leaving the Predators to play for the Barons. Part of Adrián’s animosity also stems from the fact that he’s bisexual and doesn’t realize it. I really liked that Simeon was able to open Adrián’s eyes about his behavior. Adrián isn’t a bad person, which is why his change over the course of the story is organic. It was great to see him realize just what he had been saying and the impact it had. He not only starts to think before he speaks, but becomes a better, more aware person, one who is happier and more at peace with himself.

Adrián and Simeon may hate each other at the start of Down by Contact, but the former friends turned enemies have one hell of a love story. When the tension simmering between them explodes into a fistfight on the field, they’re both suspended and forced to teach teenagers how to play football. Having to put the kids first means they have to put aside their animosity, which of course leads to the barriers between them coming down. It’s clear from the start that these two have incredible chemistry and I couldn’t wait for Adrián to realize that his feelings for Simeon run far deeper than he ever could have imagined. The sexual tension between them is incredible, and when it boils over Down by Contact gets insanely hot. In bed and out, Adrián and Simeon make a fantastic couple. That doesn’t mean the road to happily ever after is an easy one. Adrián not only has to come to terms with the fact that he’s bisexual, he and Simeon have to make hard decisions about their burgeoning relationship that could impact the careers they love (and those are only the non-spoiler obstacles). Mr. Hassell makes every bump in the road worth it, because the ending of the story left me grinning.

Down by Contact is the second book in Mr. Hassell’s Barons series, but it can easily be read as a standalone (though you’d be missing out on a great story if you skip Illegal Contact). I absolutely loved Simeon and Adrián’s romance. It’s sexy and sweet, but also interesting and layered. I cannot wait to re-read it!