Review: The Pleasures of Passion by Sabrina Jeffries 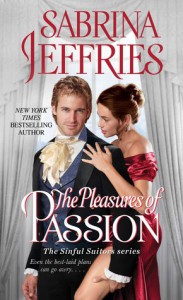 There’s nothing I love more than a well-written reunion romance, and with The Pleasures of Passion Sabrina Jeffries has delivered an excellent one. Niall and Brilliana’s story is lively, engaging, passionate, and so addictive that I read it in one sitting.

At seventeen and twenty-three respectively, Brilliana and Niall were hopeful, naïve, and in love. But when Niall was forced to flee England after a duel, Brilliana refused to run away with him. It’s easy to see why the two of them were first torn apart: they were young, unprepared for what happened, and easily manipulated by those they trusted. Seven years later, Niall has been pardoned and is allowed to return to England while Brilliana is a widow determined to build a good life for her son. Sparks flew between them when they met again for the first time in the previous Sinful Suitors book, The Danger of Desire, but with so much hurt and misunderstanding between them, both are content to merely avoid one another. Fate has different plans for them. Both of them are forced to work together to try and learn if Brilliana’s father is involved in a counterfeiting scheme, and close quarters mean old feelings are sure to surface. Normally I’m not a fan of big misunderstandings or secrets, but surprisingly it didn’t bother me in The Pleasures of Passion. Even though I wanted Niall and Brilliana to open up right away, it was logical why they had trouble trusting one another and why they kept their secrets close to their hearts.

As individuals, Brilliana and Niall are likeable characters; they’re smart, loyal, have good hearts, and they care deeply for their loved ones. As a couple, their chemistry is fantastic. It’s clear that – old wounds aside – the two of them have never stopped loving each other. Because of this, there’s emotion running through every scene, making the pages fairly crackle with energy. I couldn’t put The Pleasures of Passion down because I wanted to see them find the happily ever after that was so long overdue for them. Add in a web of lies and deception the two of them must untangle in order to crack a counterfeiting case, and it’s easy to see why there’s never a dull moment in this book. I absolutely adored Niall and Brilliana’s story and I cannot wait to see what Ms. Jeffries has in store for the intriguing spymaster Baron Fulkham in the next Sinful Suitors book!