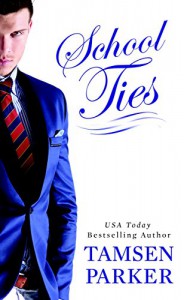 School Ties is a story I went back and forth on multiple times, making it a bit difficult to review. My indecisiveness on rating this book comes down to the fact that it’s a story broken into two distinct parts, one which I adored and one that my emotional reaction to was “meh.”

The first part of School Ties is simply fantastic. Tamsen Parker weaves an emotional journey, complete with forbidden longing, interesting characters, and a well-developed foundation for a future romance. Erin is a teacher fresh out of college when she starts working at Hawthorn Hill. She’s bright, enthusiastic, and just young enough emotionally that she’s taken advantage of and forced to face true heartbreak. As for Shep, he may only be eighteen years old and her student, but it’s been a hard eighteen years that has made him mature beyond his age. He’s smart, studious, a complete sweetheart, and protective to the core, making him easy to adore. He and Erin aren’t too far apart on the maturity spectrum when the story begins, but there are definitely still boundaries that shouldn’t be crossed and keep their relationship from ever going beyond the platonic.

It’s important for me to stop and note that everything is above-board when Erin and Shep are student and teacher. Though each of them suffers emotional angst, no lines are crossed. What we get is a gripping, tension-filled story that plays out over the course of their day-to-day lives. It’s a story of two people falling in love in a situation where they cannot and should not ever have a fully-realized relationship. I loved watching this journey and my heart broke for Shep and Erin more than once. In the first part of the story they are rich, dynamic characters and I was rooting for them to get the happily ever after they so deserved in the second part of the tale.

It’s in the second half of the story – where Shep returns to Hawthorn Hill, this time as a teacher – that things fell apart for me. Erin went from a heroine with personality to a rather limp noodle heroine who cried a lot. Shep, in turn, went from an interesting young man to a rather unmemorable Dom, and both of them felt a lot less mature than they did in the first half of the story. The mild BDSM elements felt forced and there was a blandness to their overall romance that left me disappointed. Don’t get me wrong, the second part of the book isn’t bad; I just wanted more emotion, character growth, and passion that felt organic to the tale. But after such a great build up in the first part of the story, a rather lackluster second half left me more disappointed than if I’d been indifferent to the characters all along. School Ties may not have been all that I hoped for in the end, but I enjoyed the first half of the story so much that I’ll definitely be reading more of Ms. Parker’s work.