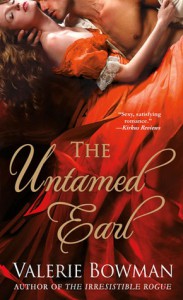 Lady Alexandra Hobbs fell in love with Lord Owen Monroe when she was fifteen and saw him standing up for her brother and his friend against some bullies. It’s been three years since that day and though Owen has a reputation for being a wastrel, Alex is still dazzled by him. Unfortunately, Alex’s parents have just declared that Owen will be courting and (they hope) marrying Alex’s sister, Lavinia.

Owen has no desire to marry just yet, but he’ll be cut off if he doesn’t acquiesce to his own father’s demands that he get Lady Lavinia Hobbs to marry him. It’s just Owen’s luck that Lavinia is a shrew in every sense of the word and that her sister, Alex, is much better suited to him. Then fate seems to deal Owen a kind hand, for Alex makes a bargain with Owen: in exchange for helping her become more polished in order to catch the attentions of a man she’s in love with, Alex will teach Owen what he needs to know to win Lavinia. But what will happen when Owen discovers that he is the man Alex has her eye on?

There are those books that are so fun, so charming, so irresistible that you smile when thinking of them long after you’ve finished the last page. The Untamed Earl is exactly that kind of book. Valerie Bowman’s fifth Playful Brides book is a sprightly, engaging, utterly delightful historical romance that I simply adored.

I absolutely loved Alex. She’s open, honest, funny, and just a bit daring. She’s also been overlooked most of her life; the consequence of being neither the spoiled eldest daughter nor the male heir. I wanted to see Alex find someone who would love and appreciate her for who she is, and it’s no surprise that Owen is the man for the job. Owen has spent a good number of years drinking, carousing, and caring more about his clothes than anything of substance. But beneath all that there lies a man with a good heart and a quick mind who just needs that extra push of someone believing in him. It was great watching Owen come into his own over the course of the story, to see him become the man those who know him best are sure he can be.

As individuals, Owen and Alex are easy to like. But together they are simply fantastic. The dialogue in The Untamed Earl is bright, snappy, and made me grin more than once. Though Alex has had a crush on Owen for years, what we see develop over the course of the story is a true romance between two equals. Owen and Alex’s love story develops organically, though Ms. Bowman doesn’t make things easy on them. The drama created by the obstacles that keep Alex and Owen apart did threaten to make the book falter once or twice, but – given that our hero and heroine had some extra help from past Playful Brides heroes and heroines – I had no doubt the story would reach a satisfying conclusion.

It’d be remiss of me not to mention that The Untamed Earl is loosely based on Shakespeare’s The Taming of the Shrew. Ms. Bowman weaves the elements of the Bard’s work in seamlessly, and it was fun to see parts of the play pop up, though the story does stand strong on its own. I love stories that are a twist on the classics and Ms. Bowman does it just right.

The Untamed Earl is the fifth book in the Playful Brides series, but having not read the previous four novels I can safely say that Owen and Alex’s book can be read as a standalone (if you don’t mind a few minor spoilers). The upside to starting with The Untamed Earl is that I can glom up the rest of the Playful Brides stories and make the wait for the sixth book, The Legendary Lord, feel shorter. Having loved Alex and Owen’s story as much as I did, that’s exactly what I’ll do. If you enjoy lighthearted, fun historical romances, you won’t want to miss The Untamed Earl!