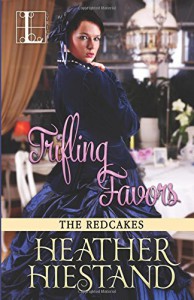 Trifling Favors is a story I wanted to like far more than I did, which makes it a bit difficult for me to review. Hardworking Betsy Popham has been an interesting secondary character in the Redcakes series and I was excited that she finally got a book of her own. I loved learning more about Betsy and my heart broke for her more than once over the course of the story. She’s the daughter of a convicted killer and has lived her life with that hanging over her head. Not only that, she’s been blackmailed, used, stolen from, and disappointed by love. Through it all, Betsy has remained a determined, hardworking woman who keeps her head held high even when life throws yet another curveball at her. In other words, she’s the perfect example of a strong heroine who you want to see find love with a hero who will appreciate all that she is.

What Betsy gets is Greggory Redcake, who – though likeable on his own – is lackluster as a romantic hero. Greggory is a widower with two babies and a teashop he and Betsy have worked hard to make a success. I was looking forward to seeing them fall in love and work together, but ultimately the romance never rang true for me. Greggory was certainly attracted to Betsy, but his “love” for Betsy felt more like lust mixed with wanting her organizational skills to run his chaotic home. He didn’t seem to appreciate Betsy for who she was, but instead tried to cherry pick what he liked about her and then fit her into the mold of what he thinks a wife of his should be. Needless to say, this was incredibly disappointing. As for Betsy, though she cared for Greggory, she still seemed more hung up on Ewan Hales, the man she loved and lost. Greggory was almost like a consolation prize, one I doubted if she was wholly certain she wanted before her hand was forced. I finished Trifling Favors wishing there was more to the ending so that I could feel the romance come together. As it stands, the story ended more with a whimper than a strong happily ever after that would satisfy.

Though I did have a number of issues with the romance, Trifling Favors wasn’t a bad read. It was slow to start, but once it picked up I enjoyed author Heather Hiestand’s writing. There’s a mystery involving theft and murder that was fun to watch Betsy and Greggory pick apart and solve. It’s this plotline that is the book’s saving grace, for it adds excitement and offers readers the opportunity to become invested in the tale.

Trifling Favors is the seventh book in the Redcakes series, and as I have been reading the series out of order I can safely say the book stands on its own. That being said, a lot of past Redcakes heroes and heroines are mentioned or briefly appear, which should delight fans. Trifling Favors isn’t the strongest book in the series and I was sadly disappointed in the love story, but I enjoy Ms. Hiestand’s writing enough that I will definitely finish catching up on the series.