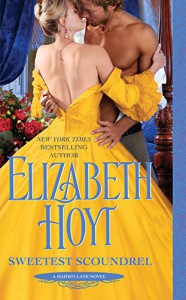 I don’t know how she does it, but Elizabeth Hoyt always manages to deliver a wonderfully unique romance and Sweetest Scoundrel is no exception. Asa and Eve are unusual historical romance protagonists, and their love story is bold, engaging, and utterly addictive.

Asa is an earthy hero, one possessing a raw sensuality that I could not resist. He’s smart, impatient, and married to his work. Yet as we peel back the layers, it’s clear that Asa is also surprisingly sweet and understanding. He’s strong, flawed, and compelling, and it takes an equally strong heroine to simply catch his attention, never mind match him. Luckily for readers, Eve meets him on every level. From the start it’s clear she’s just as smart as Asa and a hundred times more organized, and she complements him on every level. Eve also has an inner fire that has been banked by paralyzing fear that stems from a traumatic event in her childhood. She and Asa may seem to be an unlikely pair to begin with – the untamed lion and the caged dove, if you will – but their highly entertaining back-and-forth is only the beginning of the attraction. Both Asa and Eve have great capacities for love, but they’re lonelier than even they know. Each is the catalyst for the other’s change and I loved that they not only developed individually, but as a couple. Their romance is slow to build, but it simmers with utterly delicious sexual tension.

Asa and Eve are the heart and soul of Sweetest Scoundrel and the two of them alone could keep me reading late into the night. However, there are a couple other plotlines that weave fairly seamlessly into the romance. The first is the mystery of who is trying to undermine the restoration and reopening of Harte’s Folly and why. The second involves Maiden Lane series scene-stealer, Montgomery. We get to see the crafty, sometimes-villainous duke from Eve’s perspective, and I really enjoyed learning more about him. There are quite a few scenes in Sweetest Scoundrelinvolving Montgomery’s future heroine, and the teases for the next book have me on the edge of my seat as I wait for Montgomery to meet his match.

Sweetest Scoundrel is the ninth Maiden Lane book, but Ms. Hoyt provides enough information for the book to be read as a standalone (if you don’t mind a few spoilers from the eighth book, Dearest Rogue). The story isn’t flawless – the ending felt a bit rushed – but Sweetest Scoundrel is an excellent addition to a stellar series. I absolutely loved Asa and Eve together and I cannot wait for the next Maiden Lane book, Duke of Sin!