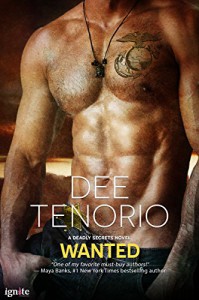 Former Marine Rick Trelane came back from war scarred inside and out, only to find his hometown overrun by a violent motorcycle club.  Although the biggest threat to his home has now been eradicated, Rick still cannot find peace.  The lone bright spot in his life is his friendship with Whitney Peterson.  That friendship is one Rick will do anything to protect – even deny their growing mutual attraction to one another.

Then a dead body shows up and all signs point to Whitney being the prime suspect.  It becomes clear that the woman Rick thought he knew inside and out has secrets, ones he’ll have to uncover if he is to protect her from an unknown danger.  The closer he and Whitney get, the harder it is for Rick to deny his true feelings for her.  But if a killer has his or her way, neither Rick nor Whitney will live long enough to see if their relationship can survive turning from friends to lovers.

Wanted is dark and dangerous with a healthy dose of sexy goodness thrown in.  Dee Tenorio knows how to blend suspense and steam, and this second Deadly Secrets novel has both in spades.

Rick is a hot as hell undersheriff who has held those he cares about the most at a distance since returning from war.  He’s scarred physically and mentally from his time as a Marine and he truly believes he can’t be the kind of man Whitney deserves.  Of course, he’s completely wrong, and Whitney sees right through his shields to the man within.  She’s smart, kind, and giving – wonderful characteristics that endeared her to me as a reader but qualities that shine all the more brightly once you see what she has survived.  Rick isn’t the only one with horrors in his past and one of the great things about Wanted was watching both he and Whitney heal over the course of the story.

Individually, Rick and Whitney are fantastic characters, but as a couple they’re dynamite.  I love a good friends-to-lovers tale and Wanted is an excellent one.  Ms. Tenorio infuses their burgeoning romantic relationship with heartfelt emotion and serious steam – what’s not to love?

Outside of Rick and Whitney’s romance there is a murder mystery that adds a great amount of suspense to the story.  Bodies are turning up in Marketta and Whitney is the prime suspect.  I loved watching the pieces of the puzzle fit together and Ms. Tenorio does an incredible job of keeping the action engaging while seamlessly blending the suspense with the romance.  Wanted is every bit as good as the fantastic first Deadly Secrets novel, Convicted.  I love this series and I hope we get to return to Marketta soon – there’s an intriguing medical examiner whose story I desperately want to read!