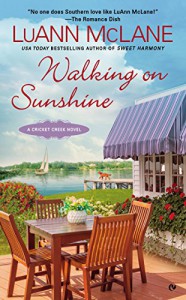 You know a book is going to be a delight when you have the biggest grin on your face before you’ve even finished the first chapter. Such was the case for me with Walking on Sunshine. Mattie and Garret are flat-out adorable together. In fact, I dare anyone not to smile at their first meeting, their banter and charm is so irresistible. They’re effortlessly appealing in the way only straight-shooting, genuinely kind characters can be, which of course makes it impossible to resist their romance.

Mattie is a tomboy who’s a not-so-secret romantic. At the start of the story, she’s about had it with the local guys not seeing her as a desirable woman. Garret’s arrival in Cricket Creek seems to be the break Mattie needs to get the object of her affections to notice her. Garret is smooth, cultured, and – as the son of a model – is the just the man to teach Mattie how to change things up. In return, she’ll help this former bad boy urbanite change his image and fit in in his new home. Mattie and Garret’s lessons are fun to read about, but though they’re both seemingly trying to change who they are, all they’re really doing is revealing different facets of their characters to the world. It was fun to watch them come into their own over the course of the story, but what I truly liked best was that both Mattie and Garret saw and were attracted to each other from the start. Neither of them needed to be anything other than themselves with one another, which was, of course, the point. There were a few obstacles in their path which sadly felt manufactured (as did the resolutions to said obstacles), but I suppose smooth sailing all the way through wouldn’t have made for much of a story.

Like all the other Cricket Creek books I’ve read so far, Walking on Sunshine contains a secondary romance. Country music star Shane and his new housekeeper/chef, Laura Lee had a sweet, fast-paced romance that I’d have liked to have seen more of. Their attraction to one another was obvious and there was so much potential to them with Shane’s past as a famous star, the scars Laura Lee’s past has left on her heart, and their employer/employee relationship. Honestly, the two of them had enough material to make up an entire book so I was a bit disappointed their plotline felt rushed. That being said, Shane and Laura Lee were charming and their story did weave well into the overarching storyline, not in the least because they were both friends and mentors to Garret and Mattie.

Walking on Sunshine is the eighth book in LuAnn McLane’s charming Cricket Creek series, but it can be read as a standalone. Having read more than half the series at this point, I do have to say that Walking on Sunshine isn’t the strongest installment. It definitely has the potential to be one of the best, but the manufactured drama and the fact that Mattie and Garret seemed to need their friends to give them a push more than once brought my enjoyment of the story down a notch or two. In addition, about halfway through the book Garret and Shane’s conversations jarred me out of the story and made me notice the writing rather than the characters, for they spoke in such a way that it was obvious it a woman was writing their dialogue. Even with these quibbles, I still thoroughly enjoyed Walking on Sunshine. Mattie and Garret are utterly endearing characters and their chemistry was wonderfully entertaining. I can’t wait to read the next Cricket Creek book, Written in the Stars.