Review: Four Nights with the Duke by Eloisa James 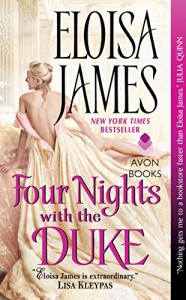 At fifteen, a heartbroken, embarrassed Mia Carrington swore she’d never marry Evander Brody. At twenty-eight, Mia has no choice but to take back her words. In order to secure guardianship of her nephew and thus protect him from his evil uncle, Mia must marry – fast. Having just been jilted at the altar, she’s desperate enough to blackmail the long ago object of her affections.

Vander can’t believe Mia’s audacious proposal – or her blackmail scheme. Against all better judgment, he agrees to marry Mia, but with a condition of his own: he’ll only bed her for four nights a year, and only if she begs for it. But when Vander learns there’s more to Mia than meets the eye, he knows he’s made a mistake. Because four nights with Mia will never be enough when he’s rapidly falling in love with his new wife.

Four Nights with the Duke is a fast-paced, addictive read filled with lively, interesting, strong-willed characters. Author Eloisa James knows how to capture your interest and not let go, and I found myself unable to put Mia and Vander’s book down.

I absolutely adored Mia. She has a big heart and is protective of those she cares about. Mia’s been hurt over and over, but though she has insecurities because of it, she remains a strong, resilient woman. I wanted to see Vander fall head over heels in love with her, because they fit together so well. Vander inadvertently hurt Mia in the past, and he makes plenty of mistakes with her in the present. Vander’s got hidden scars of his own that have given him a distorted view of what love and marriage would mean for him. He’s flawed, realistically so, and doesn’t always choose his words wisely. I actually liked that about him, because he grows over the course of the story and realizes what a treasure Mia is.

Aside from the romance, we get to see Mia and Vander’s other passions. Vander’s for buying, breeding, and racing horses and Mia’s for writing. Mia’s work as a writer of popular romances was particularly fun to read about, and watching her struggle with writing her latest gothic romance was delightful. Historical romance fans will also surely delight in the nods to authors Julia Quinn and Lisa Kleypas that are sprinkled throughout Four Nights with the Duke .

Four Nights with the Duke is the eighth book in the Desperate Duchesses series and the second book in the spinoff Desperate Duchesses by the Numbers series. Though Mia and Vander’s story can easily be read as a standalone, it was a treat to see Thorn and India (of Three Weeks with Lady X) and Villiers (of A Duke of Her Own) again. But the most captivating secondary characters are those new to the series, namely Mia’s spirited young nephew Charlie and Vander’s cheerful, often-drunk uncle, Chuffy (a nod toTwelfth Night’s Sir Toby Belch). Charlie and Chuffy bring a sprightliness to Four Nights with the Duke that I loved.

Ms. James’s stories are always wonderfully entertaining and Four Nights with the Duke was no exception. I devoured the book in one sitting and I cannot wait to read the next Desperate Duchesses story, Seven Minutes in Heaven!