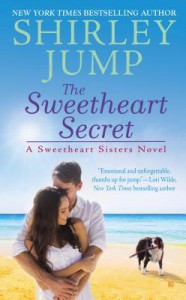 I love a good reunion romance and The Sweetheart Secret is a charming one. Despite the way Daisy comes blazing back into Colt’s life, The Sweetheart Secret is truly an aptly-titled story – it’s sweet as can be, but it also has some heartbreaking secrets that keep Daisy and Colt from moving on from the past and into the future they clearly deserve.

Daisy is a woman who flits from one job to the next, never truly settling down. Colt, on the other hand, is a man who once let go and paid a high price for it. Because of this, he’s gone to the other extreme, tamping down on any joy in his life. When Daisy bursts back into his life with a plan for renovating her family’s inn, Colt is thrown for a loop. He wants Daisy, to be sure, but he also thinks it’s a terrible idea. The two of them are just the right amount of opposite to make their attraction a blast to read about. It’s clear they fit one another perfectly, and you know if they can both move on from the past they’d make a dynamic couple. I enjoyed watching them slide back into love and their solid chemistry made the pages of The Sweetheart Secret breeze by. And if one romance isn’t enough, author Shirley Jump adds in a few more, most notably one involving Daisy’s cousin, Emma. Emma’s storyline had so much potential, but it never felt fleshed out. This was a pity, for I liked Emma and had she been given a bit more attention and was woven into the story more, her storyline could have been fantastic.

The Sweetheart Secret is the third book in the Sweetheart Sisters series, but as I have not yet read The Sweetheart Bargain or The Sweetheart Rules, I can safely say that Colt and Daisy’s story can be read as a standalone. The residents of Rescue Bay are all strong supporting characters – sometimes a bit too strong for me. The meddling Greta and her cohorts are clearly meant to be good-hearted, if a touch zany. Call it reader preference, but for me Ms. Jump took them a bit too far, turning quirky into caricature. To me they detracted from Daisy and Colt, but perhaps this goes back to not having read books one and two in the series, as I didn’t come into the book adoring Greta. However, I did like Colt’s grandfather and Daisy’s cousin along with the less oddball Rescue Bay residents. What’s more, what I saw of the previous Sweetheart Sisters heroes and heroines has me looking forward to reading The Sweetheart Bargainand The Sweetheart Rules. It won’t be long before I return to Shirley Jump’s Rescue Bay.