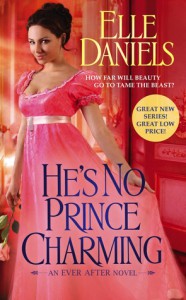 Beauty and the Beast gets a Regency romance remake in He’s No Prince Charming. Elle Daniels’s debut novel is bursting with energy and emotion, and I’m looking forward to seeing how her talent develops.

Danni is a charming heroine. She’s smart, outspoken, and though she sometimes behaves rashly, she does so out of a genuine desire to help others. Danni aches for love, and she finds it with Marcus, the man society refers to as the Beast. Though Marcus isn’t a bad man, he does do some beastly things (blackmail and kidnapping) because he sees no other way to protect his sister. Less-than-gentlemanly behavior aside, my heart broke for him, as Marcus has been abused and shunned for most of his life. He has severe problems coping with what was done to him in the past, and I liked that Ms. Daniels didn’t magically cure him of his troubles. As a couple, Marcus and Danni were surprisingly sweet. They come alive in each other’s company, even though their relationship has a tumultuous start. It’s easy to fall into their burgeoning romance, though their love story is not without its obstacles (some of them imposed by the hero and heroine themselves).

Where He’s No Prince Charming faltered for me was the believability factor. I have no problem suspending disbelief, especially for fairytale retellings, but I was asked to do so far too often in this story. Danni and Marcus act, at times, too modern for a historical romance, and there were multiple glaring historical inaccuracies (too spoilerish to reveal) that pulled me out of the story.

Issues aside, He’s No Prince Charming is an enjoyable story and I can’t wait to see where Ms. Daniels takes her Ever After series next!